A thrashing in the Champions League quarter finals showed Bayern Munich at the peak of its powers and Barcelona at the end of the line after Bayern 8 Barcelona 2 Scoreline.Champions League returns but not as you’ve seen it before

Bayern Munich scored eight times against Barcelona as the German side inflicted a record defeat on the Catalans in an astonishing 8-2 win in the Champions League quarter finals.

On a humiliating night in Portugal for Barcelona, Bayern became the first team to score eight goals in a Champions League knockout match, while Barca conceded eight in a match for the first time since 1946.

Thomas Muller opened the scoring within five minutes for Bayern, before Austrian defender David Alaba sliced into his own net to level the score.
However, three goals in 10 first-half minutes helped the Bundesliga champion assert its dominance, with Ivan Perisic, Serge Gnabry and Muller’s second stretching its lead before the break.

In the second half, Luis Suarez reduced the deficit for Barcelona but a mazy assist from left-back Alphonso Davies for Joshua Kimmich to tap in, a Robert Lewandowski header and a late Philippe Coutinho double helped Bayern progress to the last four, where it will face either Manchester City or Lyon who play Saturday.

“It’s tough to explain. I think in this moment, our team is in an incredible shape,” Muller told BT Sport after the match.
“We work so hard, we work with this intensity, I think for everybody out there is tough to beat us. We had so much fun. For our style of players, it doesn’t matter about the names of players we are facing.
“Of course, they have special players and we have to be even more aggressive and even more able to bounce back again and again. We feel good after this match, this result. It was very special.”

The team to beat?
With the way Bayern finished the Bundesliga season following its restart — winning 18 successive games on its way to another title — and how it easily dispatched Chelsea in the previous round, the Bavarians are understandably many people’s favorites to win the tournament.

But facing Lionel Messi and company on neutral ground, it wasn’t clear cut which of the two European behemoths would advance to the final four.
It was the Catalan side that had the game’s first chance as Sergi Roberto’s cross-pitch pass almost fell to Suarez only for goalkeeper Manuel Neuer to get in the way.

And it was from that save that Bayern broke for the opening goal. Neat passes between Lewandowski and Muller finished with the German World Cup winner finishing into the bottom corner.
Barcelona equalized shortly after and it came in unusual fashion. A cross from Alba from the left was sliced agonizingly over the head of the despairing Neuer 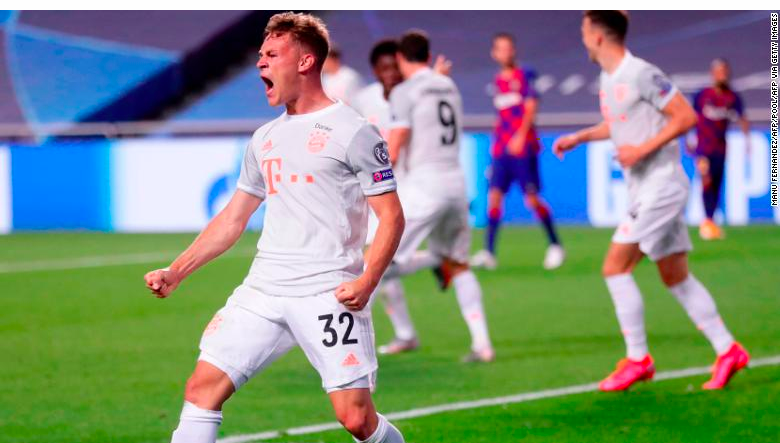 However, Barcelona’s insistence on playing out from the back, combined with Bayern’s high pressing, consistently got the Catalans into trouble, with chance after chance appearing for the Bavarians.
Eventually, the pressure told, with Perisic, Gnabry and Muller taking advantage of some slack defending as Barcelona conceded four goals in the first half of a Champions League match for the first time.

Following the introduction of Antoine Griezmann at half time, Barcelona marginally improved and reduced the deficit thanks to Suarez’s nimbleness to avoid defenders and score.
But the best goal was yet to come, and it was provided by the extraordinary 19-year-old Canadian Davies.
Having skipped away from Nelson Semedo, he evaded the challenges of other defenders, tip-toing along the edge of the pitch before laying it off for Kimmich.

Two goals from Coutinho — who is on loan from Barcelona — capped a remarkable game in Lisbon.

“I know the other teams will watch our game. They can be impressed or not,” Muller added. “But the semifinals start from 0-0 and we have to win the next game as well to reach the final.
“I’ve played in big tournaments like this and after results like these, its more difficult, so we have to be careful.”

With six of Barcelona’s starting XI over the age of 30, Barcelona was totally dominated by Bayern Munich’s youth and verve.
Following the club’s first trophy-less season since 2007/08, changes on and off the pitch look likely.

Messi, who is now 33 years old, was aiming to win the Champions League for the fifth time to level with Cristiano Ronaldo.
But following Barca’s elimination and Ronaldo’s Juventus last week, this year’s competition will be the first since 2005-06 in which neither Messi or Ronaldo will make an appearance in the semifinals or beyond.
Barcelona defender Gerard Pique admitted that “it was a horrible game; the feeling is terrible … embarrassing is the word. I think now we have hit rock bottom.

“We can’t compete like that; you can’t play like that in Europe. It is not the first time, the second time or the third time, it’s very tough. I hope it is useful for something. Now everyone has to have a good look at themselves, the club needs change and I am not talking about the coach or the players, I am not pointing the finger at anyone. Nobody is safe, I am the first to say that I will go if new blood has to come in, I am the first to leave. We have to have a real look internally about what is best for the club.”

Khanyi Mbali After being Vaccinated